Comics Power on the road

April 2, 2010,
Comics Power team was out for road activity with Laxmi Pratisthan team,
the main objective was to share wall comics on traffic awareness to the public,
participation was huge,
even traffic officers could not stop reading the displayed...
despite of the scorching sun overhead, excitement energized the activity.
check the album., in shortcut PICTURES FROM THE DAY
Posted by Robin Niraula at 8:10 PM 1 comment: 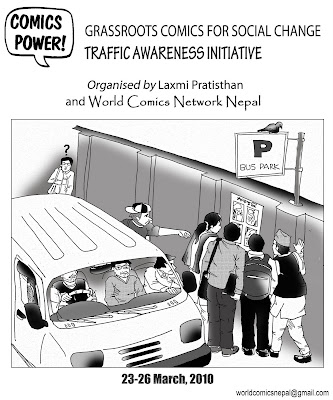 The 3 Days workshop was over on time, Every participant was ready with a comics for traffic problems. 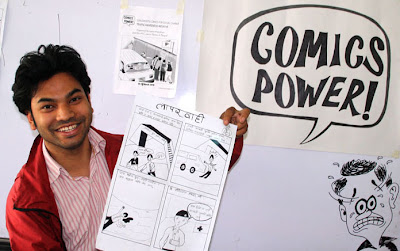 now where to go? Lagankhel Bus Park, one of the busiest bus park in the valley. Participants were running across the streets to catch passengers and drivers.,
The Bus park was so crowded that we cannot follow every comics..tempo drivers, micro drivers, students, local shopkeepers..all eyes were focussed at comics. 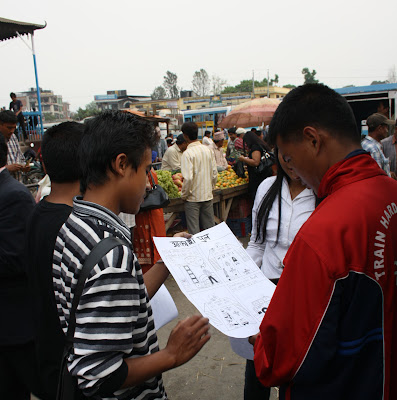 Posters were glued to the walls, but were louder than voice.

PArticipants were excited to get overwhelming comments and appreciations.
Traffic Police apreciated the initiative for a common goal.
Laxmi Chhetri, a student of GYBHSS at 11th standard reacted as: " I was excited to participate in this comics workshop wishing i could learn something interesting,... it was more...
i was really excited to find my comics pasted at a bus park, where people crowded to comment for the story..and the comments were really good..."
We have a lot more comments to include in the report. Tika Dahal, Nirijana Bhatta and myself Rabin Niraula were surprised by the enthusiasm of the participants.
Last but not the least, Laxmi Pratisthan was thankfully appreciated for their support to make the 3 days workshop a success from every lens.
-Comics Power was demonstrated in the street, once again..for the noble cause..to aware people for traffic issues... 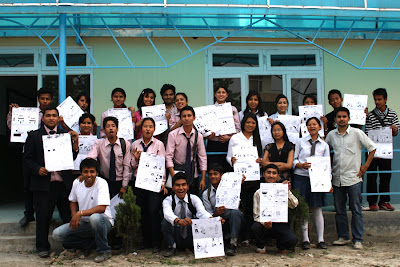 Rabin Raj Niraula, Tika Dahal and Nirijana Bhatta with participants.
View Album of the program CLICK HERE
Posted by Robin Niraula at 8:47 AM No comments: 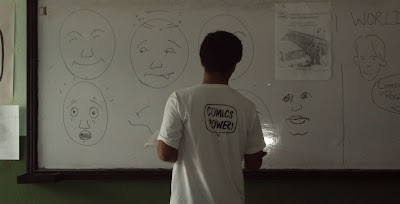 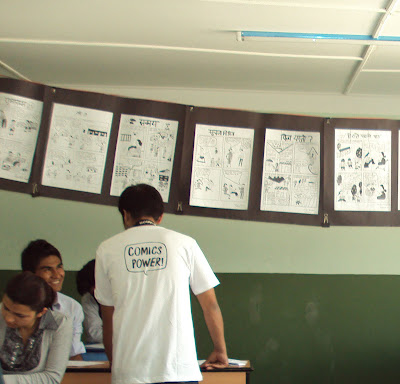 More will be updated from the front face..after completion of the workshop.
Posted by Robin Niraula at 8:48 AM No comments:

World Comics Network in Nepal is taking a leap with every single effort to share the world comics idea on Grassroots comics.
Recently, a Workshop was organised in Kathmandu where school children from different child clubs participated in the program.
The Workshop was jointly organized by Child Nepal and Child Development Society, the national level NGOs working with children. The Training workshop was conducted by Rabin Raj Niraula, Tika Dutta Dahal and Mohan Dangal, the World Comics Network trainers on Grassroots Comics. Sanjeev Adhikari volunteered the sessions during the workshop.
Krishna Subedi from Child Nepal and Kiran Thapa from Child Development Society conducted guest sessions.
The Three Day Program commenced from 29th May, 2009, Friday. It was targeted to be completed within the holiday limitations of the school children as they were able to manage two days free time only. All Hands on Exercises were completed in two days program whereas the Presentation in Display was scheduled for the third day.
Students were Keenly interested with the name Wall Comics, and were actively participating in each lessons. The Students were sure to put out their best on two sheets of A4 Papers. 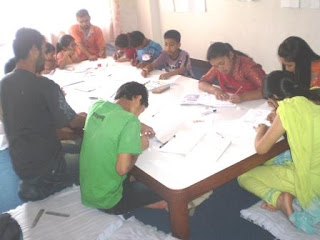 They highlighted on different issues mostly related with Child.
Child Abuse, Child Rights, Equality, School Access and many more.
Children were eager to conduct similar workshop among their friends.
Some were really interested to publish wall comics in their school notice board.
They were searching for ways to expose their own work on comics.
Some children were happy to see their drawing narration.
The Participants Learned the Bascis of Wall Comics, attaching rules and measurements. Special effects and decorating works mainly attracted the participants fulfilling the Black And White Perfectness. 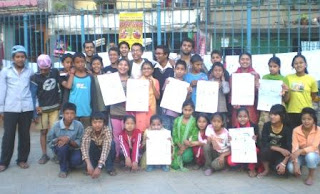 On The Third Day, Children performed their presentation by displaying their work in Chabahil Ganesthan (Ganesh Mandir Area). they collected feedbacks from the pedestrians and visitors.
Their interaction enerzided their will to draw more comics.
The Trainers:
From The Left -Rabin Raj Niraula, Tika Dahal and Mohan Dangal Conducted the three days Workshop as a trainer. 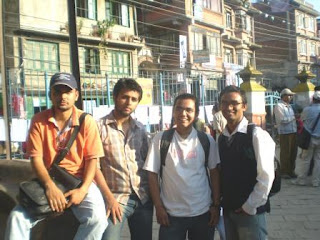 Sajib Adhikari (at the Right) volunteered
the program.
In The Background, Participants are Displaying their Work in the Ganesh Temple Compound, Chabahil, Kathmandu.
FINAL WALL COMICS 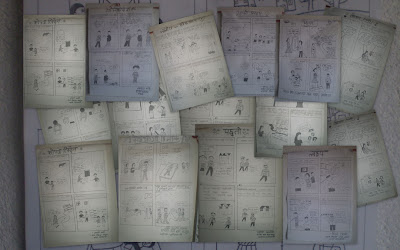 Opinion from the Participant:
Bijaya Adhikari, Haat Ma Haat Child Club : The Training workshop was fruitful for me. I came to know about various wall comics, the skill to prepare it and its importance in social arena. We can prepare wall comics in short time utilizing our own resources. It is very interesting and helps to aware people about social problems. I commit that, I will be developing a wall comic in a week. Thanks to all organizers and trainers.

Comments are Highly Appreciated.
Posted by Robin Niraula at 9:14 AM 3 comments: